Researched Nutritionals MycoPul employs multiple targeted binders to remove mycotoxins (toxins produced by mold), from the GI tract. Because each mycotoxin is unique and responds differently, MycoPul’s proprietary MycoPlex blend is formulated with multiple targeted ingredients shown in research to bind the most prevalent mycotoxins.

G-PUR uses a proprietary purification process to remove any contaminants it may have previously bound to from soil, enabling it to bind to more within the GI tract. Clinoptilolite is the most desirable form of Zeolite.

MycoPlex blend also contains superior humic acid sourced from a particular peat bog in Europe known to produce the purest and most potent humic substance available.  This bog produces material with an average humic acid concentration of 70%, compared to most other sources which average around only 30% humic acid.

While taking MycoPul it is recommended to take a multi-mineral such as Core Minerals on the opposite time of day, to replenish good minerals lost during the binding process.

Suggested Use: As a dietary supplement, take 1 capsule once daily on an empty stomach (at least 2 hours after eating or 1 hour before eating) or as directed by your healthcare professional. It is recommended to take a multi-mineral such as Core Minerals™ at the opposite time of day while using MycoPul.

Cautions:  If pregnant or nursing, consult your health care professional before use. 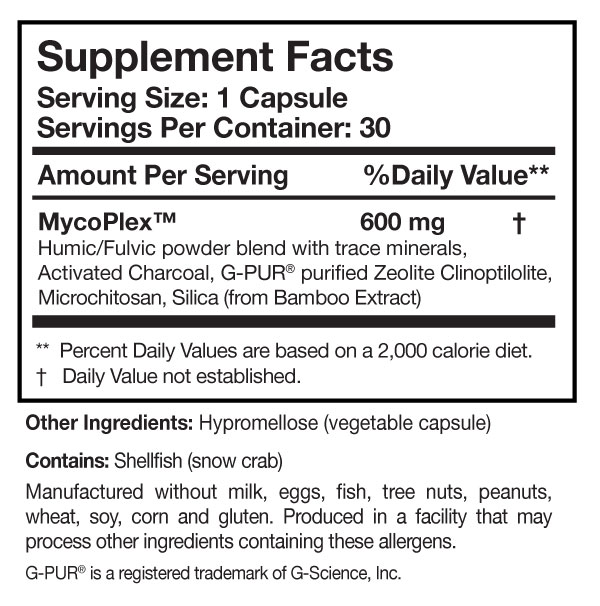